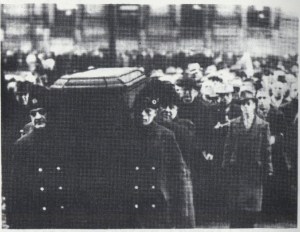 The Death of a Saint

In the ninety-first year of a life dedicated to Jesus, Mary and Joseph, the miracle man sensed his imminent departure from this vale of tears. Late in 1936, he told one of the priests in his order that Christmas of that year would be his last in this life. Once, when he passed the tiny hospital of Saint-Laurent, he commented, “What a fine place for patients to prepare for death.” At 8:30 in the evening of December 31, the wonder worker who cured so many was himself admitted to that very hospital for what the physician thought was a mild heart attack, but was later diagnosed as acute gastritis.

He spent his dying days as he had spent his whole life, unconcerned with his own sufferings — which were great, considering that he refused any pain medication — and constantly praying for others. He offered up his prayers and mortifications for Catholic Spain, then being torn asunder by civil war, prior to General Franco’s defeat of the Communists. He also prayed for the Holy Father, Pope Pius XI, who was sick and near to death. With friends at the side of his own deathbed telling him how much he was still needed, the good brother said, “There is one who is far more necessary than Brother André in this world: that is the Pope. If the Holy Father passed away, it would be disaster; he still has much to accomplish.”

The Pontiff lived for two more years, years in which he did accomplish much, addressing problems all over the globe: the Germans losing their faith to Nazism, the Mexicans being oppressed by an evil Masonic government, and the even more horrible menace of Communism. On March 19, 1937 — the Feast of Saint Joseph — the Holy Pontiff published Divini Redemptoris, an encyclical letter condemning Communism. As if in gratitude for his own recovery and with great confidence in the mighty Patriarch, towards the end of the encylical Pius wrote,

. . .We place the vast campaign of the Church against world Communism under the standard of Saint Joseph, her mighty Protector.

Like Our Blessed Lord on the Cross, his faithful imitator spoke many words of piety and holy resignation to God’s will during his final agony: “My God how I suffer. . . Heaven is so beautiful that it is worth all the trouble with which one prepares for it.. . . How good God is. . . How beautiful. . . How powerful. . . Mary, Sweet mother, mother of my sweet Savior, be merciful to me and help me . . . Saint Joseph. . . ”

The name of his holy patron was the last intelligible word issued from the holy lips of Blessed André.

So Brother André died as he had lived, suffering heroically, praying fervently, and even working great cures. The purely spiritual mission of his life became more evident when, during the exposition of his body — which lasted a week — confessionals were filled with repentant sinners who had been away from God’s grace too long. Not only at the Oratory, but all over Montreal sinners were returning to God in great numbers as more than one million people streamed past his poor little coffin. Some of these people had been sworn enemies who had spurned the miracle worker as a fake, having dubbed him, “the old fool on the mountain.” The “old fool’s” prayers very well may have saved many of these from an eternity without God, just as they may have saved Canada from the clutches of Communism.

Today, the mortal remains of Blessed Brother André lie in a black marble sepulcher in the back of the Oratory, the shrine he dedicated his life to erecting for Saint Joseph. In front of the Basilica towers a statue of Saint Joseph holding the Child Jesus. The millions who file past it every year see on its stone pedestal the words which the saintly old guardian calls out from heaven: ITE AD JOSEPH — GO TO JOSEPH! 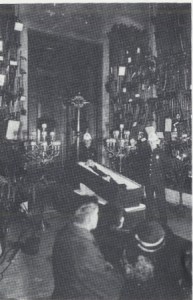